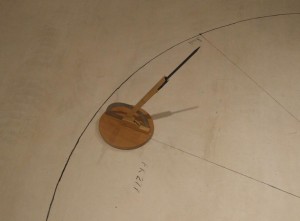 On the ground, there are three elements designating direction. The imaginary extensions of these elements converge at a mathematical point into the vacant space.
This imaginary point constitutes the artwork “BEING”.
It is timeless, intangible and imperishable. Invisible but at the same time objectively existing, it is implied by objective landmarks. Distances around it, are infinite towards every direction. In this way, it signifies the center of its surrounding infinite space-time which constitutes a causative factor of it and every occurrence. When everything collapses and is recreated, this point remains always there unchangeable.
Our identification with a point like this, already existing in ourselves, transforms us to a center of the Universe! A wonderful center of equal importance to any other center.
If Man is created in the image and likeness of God, then Man doesn’t constitute “something”, “a content” or “a form”. Man is mainly what pre-exists these changing notions. By searching for a constant and eternal truth we inevitably end up to what this intellectual fluidity owes its existence. In other words, to the sense of “BEING” without any other acquired characteristics.
The knowledge of our primordial nature comes when we do not attempt to describe what we think we are. If we resist with persistence and courage describing it, “BEING” deluges in a physical way the silent space of a mystic tranquility inherent in every human being. It is not a conceptual knowledge because every concept has a name and form. It is an experience here and now, born from no information, no theory or conceptual findings. It is only experienced as a powerful sense of being and is revealed when everything else is set aside.
This artwork is signified by a strictly objective way and it is led until its limit. This is not a dead-end limit but the gateway to a new beginning, to a courageous objective perspective going, through the experience of One’s inner self, to the union of Everything as well as to a new objectivity.