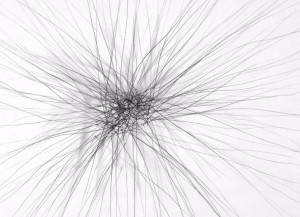 Voyage to the Void

The exhibition “Voyage to the Void” belongs to the second part of my visual arts trilogy entitled “The Traveler”, which concerns a journey of the self’s perception and the relationship of the space that surrounds it.

The way I paint in this series of works is the following:

I stand, eyes shut, waiting in front of the white surface of the paper…

At some point, a certain kind of energy puts my hand in motion and with graphite as its tool, leaves its trace on the paper

The thoughts that pass through the mind during the act of drawing create feelings that might halt its flow. When the mind does not engage in these thoughts but allows them to come and go merely observing them, then the act of drawing is in flux, evolves freely and without obstacles, and lasts until the energy that moves the hand is lost as unnecessarily as it appeared.

Through such a view, the visual result is insignificant because the mind achieves the awareness of the insignificance of existence, transcending thus any acquired social or aesthetic characteristic, even the consciousness of sex.

Existence itself is experienced, as well as the gap in which it appears.

My works in the “Voyage to the Void” exhibition are drawing by feeling, where visual knowledge disappears, giving its place to internal criteria of correctness. They develop through a deep subjectiveness, are defined by the internal measure, approach the truth through the sense of experiencing a timeless present. They become free from a consciousness experienced linearly, causally and separately from the objects of the world, and are created through an awareness which is experienced as inspiration, spherically and unecessarily, creating the ways through which concepts take shape.

The “Voyage to the Void” exhibition suggests a means of perception where the meaning of existence does not depend on the cosmos, but the cosmos is the one created and given meaning from existence. It recognizes an existence independent from interpretations and definitions, and offers it the freedom of choosing the essence for itself and the cosmos.

Dimitris Tragkas,  May 2015 (Prologue for the exhibition “Voyage to the Void” at the Horos Theater space, Athens)