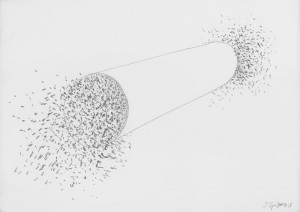 “The Traveler”
a visual arts trilogy

My contemporary visual arts activity is stated with the trilogy “The Traveler” and concerns a journey of the self’s perception and its relationship with the space that surrounds it. This relationship is reflected through three visual arts activities that refer to the external and infinite objective space, the equally infinite subjective space and finally, their synthesis in an indivisible unity.

The first part of the trilogy, entitled Ouranometria”, (Measuring the Heavens) consists of drawings of new three-dimensional constellations, sketches that have been introduced into the zodiac cycle, mathematical points at fixed positions but also in trajectory, all defined by astronomy coordinates and assimilated into our solar system. It also includes four-sided reverse pyramid, whose points are defined by three stars and a position in the exhibition space. The visible part of this work is the detail of the heavenly body that enters the exhibition space. At a specific but different time each day, this heavenly sculpture is synchronized with the installation at the exhibition. In these works, the background painting depicts a game played in real outer space.

The second part of the trilogy, entitled “Voyage to the Void”, consists of drawings with graphite, drawn with eyes shut, replacing with a visual gap the background of my earlier drawing. It is drawing by feeling, whereby visual knowledge disappears, giving its place to internal criteria of correctness. The phrases included in the sketches are added at a later stage and are images or thoughts that come and go inside the mind during the act of drawing, from which the act of drawing is detached.

These drawings develop through a deep subjectiveness, are defined by the internal measure, approach the truth through the sense of experiencing a timeless present. They become free from a consciousness experienced linearly, causally and separately from the objects of the world, and are created through an awareness which is experienced as inspiration, spherically and unnecessarily, creating the ways through which concepts take shape.

The “Voyage to the Void” suggests a means of perception where the meaning of existence does not depend on the cosmos, but the cosmos is the one created and given meaning from existence. It recognizes an existence independent from interpretations and definitions, and offers it the freedom of choosing the essence for itself and the cosmos.

The visual arts trilogy “The Traveler” captures the route of the self’s perception and its relationship with the space that surrounds it. Within this trilogy, the visual traces of a course based upon concepts and values which I consider coexistent in the essence of human existence, are delivered:

The infinite and fluid sides of life, and at the same time the stability of their viewing point and the purity of our personal perception.

The infinite and immaterial cosmos of thoughts, imagination and feelings of ours, together with the ultimately unique way of their existence in the material world, through our expression each moment.

The dignity, seriousness and coherence, which do not exclude, but rather harmonize with poetry, humor and play.

The visions and their realization.