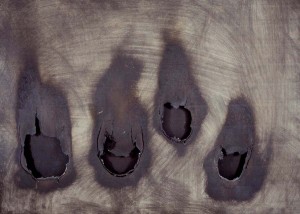 The artist and His Work: an Absolute Relationship

When a relationship between two forces begins to define a world of its own, far removed from all other observations and analyses of reality, then an image of the Absolute starts to take shape.

Dimitris Tragkas and his work reflect just such an image.

Every pictorial idiom develops like an image of relationship with something else, something that exists beyond the artistic object itself, which simultaneously represents the fundamental value that a work can put forward. The final form of a work is nothing more than the transferal, into the sensory realm, of the history and the various stages of the development of this relationship. What in the end is seen as one, in reality conceals an invisible complex of differing, even opposing, components. The image of a uniform yet evolved state arises in works where this particular complex has been realized through an intellectual process which is countepointed by the exprerience of the artist. Within the various logical points of view an image of an autonomous movement arises which is not checked by any impediment the trajectory of time can erect. In other words, these works speak convincingly about another form of energy, another truth. This energy is not intended to referto what is commonly perceived as space or sensitivity. Its role is to project an image to the sensory realm, as if it were a far-off place, as if it were an individual goal. For this reason, the language of these works does not utilize morphoplastic features which merely describe a space. Nor does it refer simply to codes for a rationalistic reading of a reality or a psychic participation with it. These works set forth the condition of existence, a kind of osmosis of all the qualities and forces of humanity and nature in a uniform space, energized and unfolding.

The profound and vivid spaces in the canvases ot Dimitris Tragkas belong to such an unfolding world, to a world that is not made up of separate compartments of existence but is typified by movement in all directions: within, above and behind the surface. His works are the image of the sojourn of the artist in far-off worlds, which reveal teh mystic rules of growth, the secret passages in which they roam.

Dimitris Tragkas does not transform only what he sees, what envelops him as a structural elemen’ of space. He transubstantiates the very feel of matter, what he can touch, into an image of a boundless space, which splits and grows limitlessly. His means are his own transformative energy, fire being the main tool by which he opens passages through the solidity of any material he uses (paper, tar-paper and the like). The space is generated, created, not via a pre-fabricated image or feeling, but in accordance with the degree to which the relationship of the artist with his material develops. This absolute and indissoluble relationship is capable of fragmenting the image of the concrete which is also one the permanent and powerful reactions raised against the artist’s flights of vision.

The fire-forged work of Dimitris Tragkas does not speak metaphorically about another reality. Nor does it comment on what exists by means of the correlations which the images of natural and historical reality create. On the contrary it defines the means which can supply the potential for vanguishing the concrete through a combatitive and vigorous struggle with nature as something concrete in itself. The means adopted by Tragas focus on the knowledge and contact that have been lost with maiier, as a force of Nature. It is, furthermore, the developement of a natural and moral force whereby one can understand something, not in order to confirm what has been defined, but to discover knowledge as something undefined. In the end, his work speaks of a nature that does not define, but rather embraces everything.

In an analogous manner, Dimitris Tragkas brings his works to realization through an absolute and secretive embrace of the materials he employs. He molds and shapes these worlds in dark spaces, in a dark where knoeledge is light and feeling, vision. His language is the language of balance between the struggle of knowledge and vision; heisguidedby his feeling for the whole which matter affords him. Each movement, each «roaming» over the material surface outlines the form of this relationship. The body and the mind of the artist become one with what he is shaping, so that the final image does not belong either to a subjective feeling or an objective observation on the world wich surrounds him. What his works depict is the pure energy of the struggle between the intellectual and the physical roaming through the material world.

Alberto Burri, one of the leading figures in the history of the art of this century, expressed through his extraordinary work – in an absolute and expiatory way – the autonomy of matter and the absolute power of its image, which goes beyond any pictorial representation of the absolute. Burri also used fire in several of his works to burn away sections of the piastic materials in the two-dimensional spaces he was fashioning. Through his work he was able to make us understand destruction as an aesthetic act which energizes the genesis of new forms.

Dimitris Tragkas has not seen Burri’s works. He has not created his works by references to the history of art. But these do exist. This makes it easier for us to defferentiate the spirit of each separate world, even though a number of their materials are held in common, even through they are on such widely varying scales that the size of some of them, inflated as they are by historical time, threaten to eclipse the rest which were born and move about under the same constellation.

But each work has its own separate history. Each work that manages to liberate itself from the bonds of the dominant forms of its period solely through the inner impetus the artist supplies also creates a different historical arena. The form of Dimitris Tragas’ work, which is now taking shape, reveals an artist who, through his own idiom, is struggling with fortitude and self-knowledge to rid himself of a certain type of behaviour and expression which characterizes the uncertain course of our times.

The work of Dimitris Tragkas abolishes any form of “distancing” for the ovservation of any given reality within the framework of a painstaking examination of phenomena and the analysis of the objective world: he opposes the dominat rationalistic behavior, within the limits of knowledge, and the imposition of order essential for the balancing of social and political requirements; futhermore, this occurs within a space which is innundated by the commanding surge of subsidiary bodies and objects that energize our intellectual and somatic forces, which itself is contained wtithin the flow of obscure commentary marking our times and the distance we keep from the inconstant tragectory of history.

Dimitris Tragkas sets forth a destructive force in opposition to whatever tries to distance us from what nature has offered us as energized matter. The artist comes into such intense bodily contact with the concrete material area of nature that we do not comprehend reality through the history of forms, objects and our aesthetic relationship to them, but rather see them anew as a challenge which impels us to travel and discover realms of knowledge and space before they are able to reach us.

The work of Dimitris Tragkas re-affirms, in a dynamic and absolute way, that art, as a creative act, is not just an idiom, a «composition», which springs from reason and reading. It is an act of unceasing composition based on a knowledge of reality, a practically rapturous act of composition which blots out the forms of history for the sake of the continuation of knowledge.

(From the catalogue of the exhibition “Black Paintings” at Medusa Art Gallery, 1990)