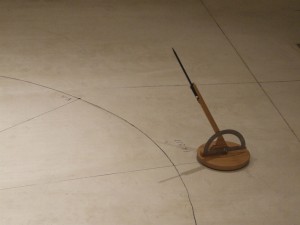 In a world in going through a crisis, where the competitive mentality of globalisation seems to unfold blindly, where no one -not even the most powerful world or international corporation leaders- seem to be able to halt its course, philosophy incites an increasing interest; probably because it offers a hope to re-discover points of reference and meaning for our existence. Responding to this need, Dimitris Tragas gives a subjective character to whatever is happening around us and builds his works upon this truth.

Since 1990, Dimitris Tragkas has run a visual course of significant installations such as the Zeppelin (1993), the Centre of the World (1997), the Geometria Universalis (1998) as well as of two-dimensional works, which suggest that the material part of the art work has gradually become less important. His interest has focused on the perception of the self and its relation to the space surrounding it. His contemplations on life and art are purely ontological. He has been involved with philosophy, astronomy, acting, chess, martial arts, traveling while seeking to explore the absolute, the source of all action, the knowledge of a deeper and timeless truth.

I was first introduced to his art at Medusa gallery, where he was curated by the art historian Efi Strousa. I worked with him in 1998, at Aeschylia festival, where he turned the ceiling of the old factory into a starry sky simply by using ropes.

Dimitris Tragkas is not objective. Objectiveness is a mindset deriving from a social consensus reality. Dimitris Tragkas is deeply subjective. His contemporary work springs from the sense of the experience of being before it is invested with any interpretation. However, he uses the objective language to express his art in a world of consensual objectivity.

With this construction he presents us with his work BEING. Through the mathematical language and in an absolutely logical way he guides us into “seeing” an invisible point in the exhibition space and, even further, into trying to feel this point; an invisible, immaterial and timeless point through which we shall experience the timeless space that unites us, the has been and will be regardless of any phenomena that will appear and dissolve within it.

Dimitris Tragkas invites us to unite with the eternal. To experience the solid sense of the self in unity with the timeless space, free of any idea, goal or convention. With this work he leads us into a experiencing consciousness not in linear and deterministic way but as something happening in a constant present. He widely opens the door to quantum physics by suggesting a mindset whereby the sense of existence does not depend upon the world but the world itself is created and derives its meaning from the sense of existence. He acknowledges an existence unconstrained by any interpretation and definition thus endowing it with the freedom to choose a meaning for itself and the world.

Dimitris Tragkas reminds me of Joseph Beuss who, born in Nazi Germany, changes his entire belief system when his combat aircraft falls into the russian steppe, where he is treated by Tatars, who cover his broken arm with animal skin. Since then, he changes his political opinions and dedicates himself to a work entirely subjective. The first work of this change is a sheepskin that looks as if it is breathing, as a reference to the bandage on his arm.
This is also the way Dimitris Tragkas conceives art, in a way absolutely subjective.